Video on the Bumper Turtles Challenge:

Note: DO NOT make changes to the “Paint Landmarks” procedure.

Your challenge is to make the turtles react to the landmarks created by the “Paint Landmarks” procedure, following the same rules laid out in the Trailblazer activity.

The rules for turtle movement are:

To complete this Challenge, you will need to use some new command blocks in addition to the blocks you used in Lesson 1 and 2.  Watch the video explanations of these blocks. (For more information, refer to the StarLogo Nova Blocks Guide.) 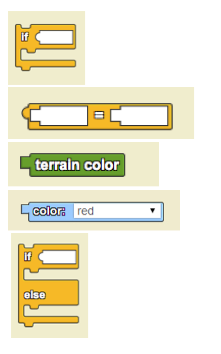 
BRANCHING WITH CONDITIONALS
In addition to simple stacks of commands as we did in drawing a flower and painting turtles projects, we can instruct a computer to execute different stacks of commands depending on the circumstance or condition.  For example, we might want to write different behaviors for a coyote agent based on a condition.  If it runs into a rabbit then chase the rabbit BUT if it runs into a mountain lion, run away from the mountain lion. To do this, we use a statement called a CONDITIONAL statement.  It looks like this
IF (something is true) THEN (do this)

Upload your project:
Post a screen shot of your project and a link to it in your portfolio in the section "SLNova Projects->SL Nova - Intro" under the heading "Bumper Turtles."