In this activity, the guided tour, students will learn about the user interface, modeling paradigm, and components of StarLogo Nova.  Videos or live demonstration can be used to introduced the interface then students are guided through their first build of a StarLogo Nova model called "Flower Turtles."


StarLogo Nova is an agent based modeling (ABM) environment that was created by the Scheller Teacher Education Program at Massachusetts Institute of Technology. StarLogo Nova is the newest version in a long line of Logo based educational environments. StarLogo Nova is special because it is entirely web-based. Since it is web-based, you do not need to download or install any software on your computer or school’s server.  To get started in StarLogo Nova, all you need to do is go to slnova.org and request an account. In Project GUTS' Computer Science in Science modules we will use StarLogo Nova to build and experiment with models of complex adaptive systems within regular school day classes. Why is this important? StarLogo Nova gives students and teachers access to tools, similar to those used by scientists and researchers, with which to study systems in the world around them.

The StarLogo Nova User Interface is made up of three parts. The top part, called the Information area, is a place for you to give your model a title and record notes about your model.

The middle part, called Spaceland, is a 3D world where the agents are displayed. It consists of a green flat plane (called the terrain). Note that it has several buttons that can be used to control the simulation. The “setup” button, “forever” button and “score” box are called “widgets” or “use interface elements”. 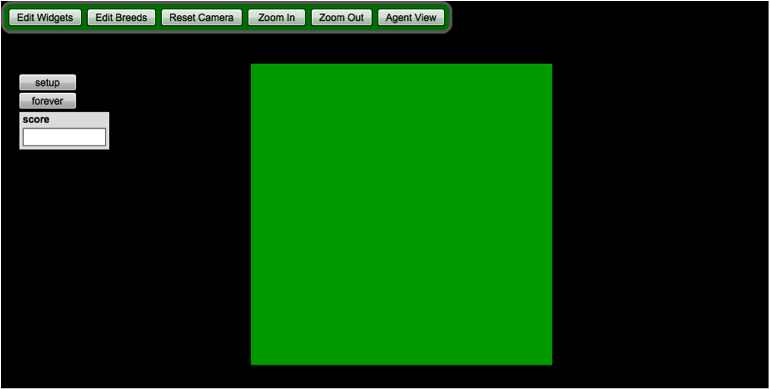 The bottom part, called the Workspace or blocks area, contains drawers of blocks that represent the programming commands, and pages where you snap the blocks together to write programs. Programming is basically putting together a logical sequence of instructions.

In StarLogo Nova, a model consists of the environment or terrain, the agents who represent individual characters in the model (whether they are water molecules, fish, or even humans), and interactions. Interactions can take place between agents and their environment or agents and other agents. A “model” is the virtual world you set up in StarLogo Nova. It can contain agents, the environment and behaviors that have been specified in computer code. We call “running the model” forward in time “Simulation”. 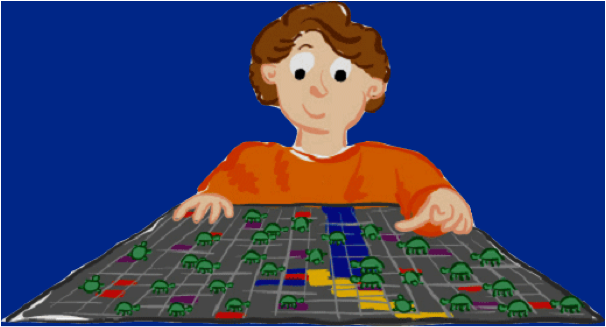 There are two main phases in Simulation. The first phase is called the “Setup” or “Initialization” phase in which the world and the agents are created. The second phase is called the “forever” or “runtime” phase. In this second phase, each agent follows its set of instructions then waits for the other agents to finish their set of instructions before taking another turn. Before taking another turn, time moves forward, and Spaceland gets redrawn with the updated state of the world and the agents. 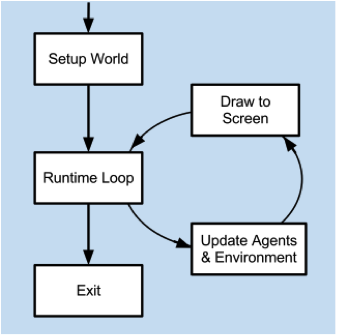 There are three major parts of any agent-based model: agents with rules that they follow, the environment in which they coexist, and time. In StarLogo TNG, the first two are easy to see – the agents are the different turtles and the environment is made up of square tiles called patches. Time is harder to see, instead it can be thought of as a series of time slices or “ticks”. At each tick, all of the agents have a chance to update their position or state. Ticks or time slices are not the same as seconds because it may take more or less than one second to update all of the agents.

As a modeler, you decide what gets included (and what gets left out) of the model, and you get to write the instructions that tell each agent what behaviors to carry out.

The Terrain is a coordinate plane that is 101 tiles long by 101 tiles wide. The center of the terrain has coordinate (0,0). You can see different views of the terrain by maneuvering the “camera” using the control, option, and command keys. Simply click on the key and click and drag on the terrain. Try seeing the world from various perspectives.

Agents can take on different characteristics and behaviors. We often call agents “turtles” for historical reasons – the first agents in Logo were robot like “turtles”. Each agent can be represented by a 3D model. You can select shapes for your agents from the library of 3D models. (Refer to the common document called “3D shapes”)

There can be many different types of agents within a model. Each different type of agent is called a breed. For example, in a model of rabbits and coyotes, the rabbits can be one breed of agents while the coyotes can be another breed of agents. “Everyone” refers to all of the agents except for “The World”. “The World” is a special “super” agent that is responsible for setting up the world and creating the other agents.

Pages are areas where the user organizes blocks to control the different agents. There are initially three different pages: Turtle, Everyone, and the World. The blocks in the Turtle page are the instructions the turtle agents follow. When you create new breeds, new pages appear for them. Turtles are the starter breed of agents so there is a “Turtle” page by default.

Procedures are stacks of blocks that are executed or “run” when either the user clicks a button, or when the program asks the agents to take their turn. 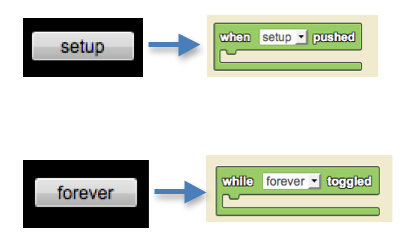